President Ram Nath Kovind, who is currently in Uttar Pradesh as part of his four-day visit to the state, will travel to Gorakhpur on Saturday, the third day of his tour. President Kovind is scheduled to lay the foundation stone of the AYUSH University and inaugurate the Mahayogi Gorakhnath Vishwavidyalaya in the city on the same day. 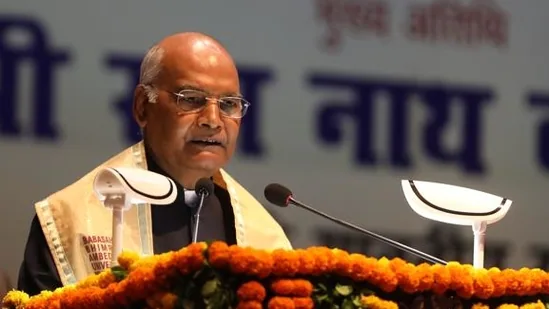 According to officials familiar with the development, the President will land at Gorakhpur around 10:40am; thereafter, he will travel to the Bhathat area of the district for inaugurating the first AYUSH University of Uttar Pradesh.

The state government plans to spend Rs. 815 crore on the construction of AYUSH University, for which it had acquired 52-acre land for the university near Pipri and Tarkulhi villages.

The AYUSH University will be run according to the guidelines of the Central Council of Indian Medicine, regarding the establishment of Ayurveda, Unani, Homeopathy, Yoga, and Naturopathy educational institutions in the university, a state government official said.

The Ayush University will be called Mahayogi Guru Gorakshanath Uttar Pradesh State Ayush University. Three out of the four universities, which are now going to be established in Gorakhpur, are affiliated to Gorakshapeeth.

After addressing a public meeting at the site, the President will leave for the Mahayogi Gorakhnath Vishwavidyalaya campus to dedicate the university to the state. He will leave for state capital Lucknow later in the day, according to those aware of the President’s itinerary.

Ahead of the President’s visit, Uttar chief minister Yogi Adityanath visited Gorakhpur on Tuesday to review preparations for the events. Adityanath inspected the spots and directed officers to maintain sanitation, security, adequate seating arrangements for the invitees besides ensuring that common people did not face any problems during the programme. He also directed the state government officials in charge of the events to prepare a list of all the invitees.

Mahayogi Guru Gorakhnath University, a private institution, has been established by Gorakhnath Temple Trust. It has been named after Guru Gorakhnath—the founder of the Nath Panth. With two new universities, Gorakhpur will now have four. Pandit Deen Dayal Upadhyay Gorakhpur University and Madan Mohan Malviya Technological University are enrolling the students inspiring for higher education.

3270 AYUSH doctors will be recruited in Bihar, BTSC will release notification soon