Srishti Homoeopathic Fertility Care, a joint venture of Yenepoya Homoeopathic Medical College and Hospital (YHMCH) and Department of Ayush, has helped a woman from Padubidri deliver a healthy baby.

On Friday November 26, Yenepoya Homoeopathic Medical College and Hospital in collaboration with Dakshina Kannada District AYUSH Department held a press meet announcing that through their join initiative ‘Srishti Homoeopathic Fertility Care,’ they were able to gift a family with a baby. The couple, Anwar and Sabiya was blessed with a baby boy on October 12, 2021. 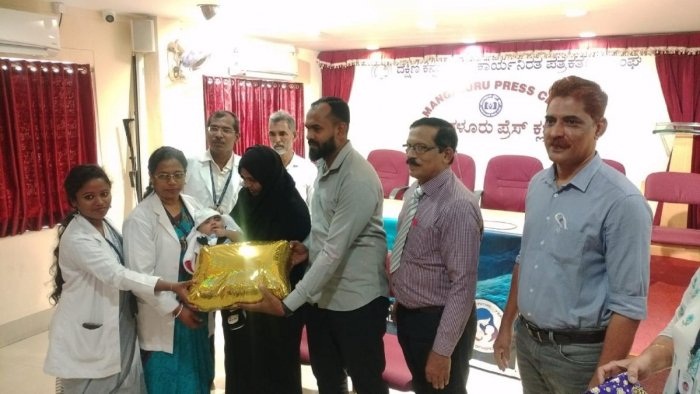 This is the second baby that was delivered under ‘Srishti,’ a homeopathy fertility care project that was launched at YHMCH by former Union Minister for Ayush Sripad Yasso Naik on August 29, 2019, said District Ayush Officer Dr Mohammed Iqubal.

The baby born on October 12 weighs 3.8 kg and is healthy, he told media persons at Patrika Bhavan on Friday.

The first child was born on November 28, 2020. As many as 47 couples had registered with the Srishti Homoeopathic Fertility Care for treatment. Fifteen patients were able to carry on the treatment amid Covid-19 pandemic. The Covid-19 pandemic was a set back for the project to some extent, he said. Besides two deliveries, two more women had conceived after the treatment.

The patients have to spend money only on few tests like hormone tests that are not available at Wenlock Hospital.

Anwar and Sabiya were childless for the past nine years.

“We had undergone treatments for more than four years after our marriage and ended up spending a huge amount of money. With the treatments failing to yield any result, we lost all hope of having a child.

“After I joined Yenepoya (Deemed to be university) as a driver, many asked me to consult doctors at Srishti Homoeopathic Fertility Care. Within a few months of start of treatment, my wife conceived,” an elated Anwar said.

Dr Kiran Kammar, HoD of Gynaecology and Obstetrics, YHMCH said that consultation for the treatment under the Srishti project was now being given in outpatient wing of
Ayush Hospital in Wenlock Hospital in Mangaluru and medical college hospital in Naringana.

‘Srishti Homoeopathic Fertility Care, first of its kind in Karnataka was launched on November 2019, and has been providing treatment for infertility.

District Ayush Officer Dr Mohammed Iqubal said that ‘Manasa Mitra’ was launched in association with Yenepoya Homoeopathic Medical College to treat children with learning disability, autism and other issues at Ayush Hospital on the premises of the Wenlock Hospital. A palliative care and a day care centre will begin at the Ayush Hospital soon, he added.

The in-patient ward at District Ayush Hospital will be opened after all equipment reach the hospital.

The district Ayush department has launched ‘Samrudhi’ scheme to treat malnourished children in district which is being implemented in association with Father Muller Homoeopathic Medical College.