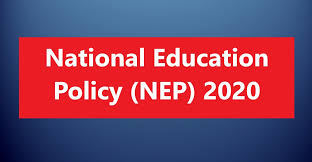 The NEP, states: “Given that people exercise pluralistic choices in healthcare, our healthcare education system must be integrative meaning thereby that all students of allopathic medical education must have a basic understanding of AYUSH and vice versa.” 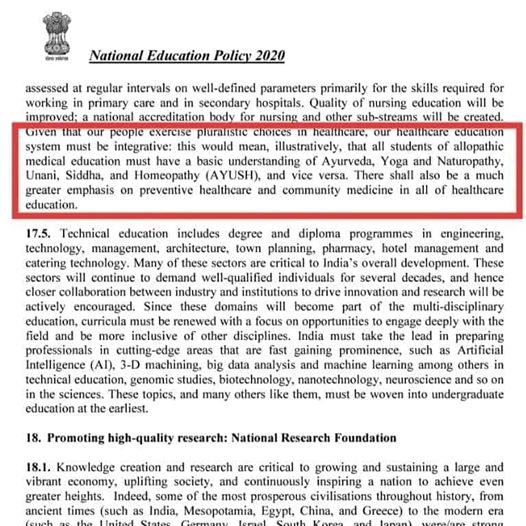 The NEP states that healthcare education needs to be “re-envisioned”. The objective, it explains, is “that the duration, structure, and design of the educational programmes need to match the role requirements that graduates will play”.

“Students will be assessed at regular intervals on well-defined parameters primarily required for working in primary care and in secondary hospitals,” it says. “There shall also be a much greater emphasis on preventive healthcare and community medicine in all forms of healthcare education.”

On the flip side, Ayurveda experts said the move would boost the confidence of modern science doctors in traditional systems of medicine.

“It’s a welcome move. Our students already have to clear the examination on pathology, pharmacology, anatomy and physiology, which give a basic understanding of modern medicine. But this move will be useful for students studying allopathy,” said Dr Pradeep Prajapati, professor at the All India Institute of Ayurveda (AIIA), the apex institute for studying and researching the ancient Indian system of medicine.

Anil Khurana, director general of the Central Council for Research in Homoeopathy (CCRH), a central government-run institute, said: “The move will further facilitate the integration of AYUSH systems at various levels of treatment at primary, secondary and, most importantly, in tertiary care, as is being observed in the management of Covid-19, where homoeopathy is being evaluated in allopathic hospitals.”

Dr M.A. Qasmi, joint adviser (Unani) with the Ministry of AYUSH, added: “It is a good initiative and it will have a great positive impact on healthcare sector. Having basic knowledge of other medicinal systems will give medical students greater understanding on preventive healthcare and community medicine” 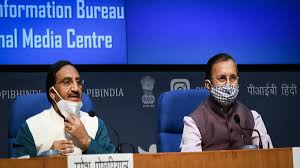 But Allopaths start their protest

Dr R.V. Asokan, secretary general of the doctors’ lobby Indian Medial Association told , “When the NEP was being discussed six months ago, we had raised concerns about this point. But they have finally made it official.

“How can we think of making a doctor a ‘jack of all trades’ and do experiments on patients? We must not intend to produce hybrid doctors as it will eventually produce official quacks.”

Asokan added that it was the “wrong policy decision”, and that the IMA is thinking of resending its concerns to the government.

“The move will sound death knell for modern medicine and will create hybrid doctors. These doctors, on paper, may create quantity but will lack in quality. It will also be detrimental to our traditional Ayush systems as they will be subsumed in other systems, losing their own identity,” said Dr Ravi Wankhedkar, former president of the SAARC Medical Association and the IMA.

Other health experts cautioned that even if integration takes place, it has to be based on evidence-based science, experts caution, else there would be a grave mismatch.

Anant Bhan, a researcher in global health, bioethics and health policy and former president of International Association of Bioethics, said, “While pluralistic healthcare with integrative medicine (Allopathy-AYUSH) can be a positive for patients, it must build on evidence and engagement which is based on science and best interests of patients.”

A high-ranking government official, who is also a member of the Medical Council of India (MCI), said the move is inappropriate and needs correction.