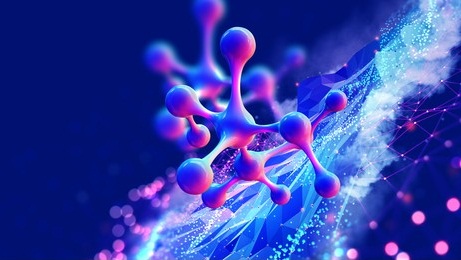 Homoeopathy medicine from centuries provides a lots of advance version of internal medicine, but due to scarcity of advance machinery , the mechanism of “How Homoeopathy Medicine Works” was undiscovered.

But knowingly or unknowingly the System of Internal Medicine perceive needfulness of some therapy in this ever changing world.
This result the initiation of Nano therapeutics & Pharmacology, Molecular imprint therapy by MIPs.

What is MOLECULAR IMPRINTING?

In brief, molecular imprinting is defined as the formation of artificial receptors for a specific target molecule on a polymer or on self-assembled materials.

During the last years, artificial nanostructured materials attracted increasing scientific interest due to some remarkable properties such as High Surface-to-Volume ratio, low cost and straightforward preparation and handling. Among others, such materials show high potential for highly selective recognition in different fields of Analytical Chemistry, such as chemical sensor design.

Carrying forward the approach of molecular imprinting from bulk/thin film to nanoparticles(A nanoparticle is usually defined as a particle of matter that is between 1 and 100 nanometres (nm) in diameter)is one possible way to actually achieve that goal.

Recent years have hence seen substantial increase in the number of MIP nanoparticle publications. This review gives a detailed overview of established precipitation and microemulsion methods for synthesising molecularly imprinted polymer (MIP) nanoparticles (NPs) as well as giving an outlook on improving those by “living” polymerisation techniques to achieve controlled geometry and thickness as well as post-synthesis functionalisation.

Finally, MIP NPs have also proven very useful as plastic antibodies in pseudo-immunoassays. Molecularly imprinted polymers are synthetic receptors for a targeted molecule. As such, they are analogues of the natural antibody–antigen systems. Rapid development of antibody-based therapeutics are crucial to the agenda of innovative manufacturing of macromolecular therapies to combat emergent diseases. Although highly specific, antibody therapies are costly to produce. Molecularly imprinted polymers (MIPs) constitute a rapidly-evolving class of antigen-recognition materials that act as synthetic antibodies.

So, what is the connection between MOLECULAR IMPRINTING & HOMOEOPATHY? 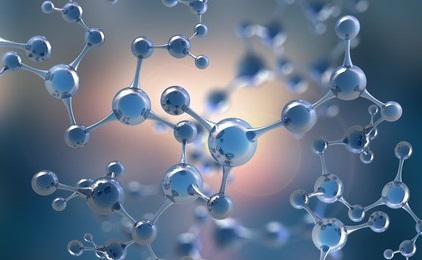 Serial dilution procedure of preparation of homoeopathic medicine from crude drug substances with the process of succussion , actually imprinted its molecular substances. The molecular substances present in the alcoholic medium “top down” by mechanism of serial dilution with succussion method. From bulk to thin & then its amount are presence as nanoparticles in solution. Further dilution makes the amount of the molecules as Quantum Dots.

Here we wish to discuss about a research paper on-

the presence of NPs in the centesimal scales up to 50M potencies has been demonstrated, where the majority of particles have been within quantum dot (QD) size (Nanoparticles of less than 10 nm size).

With the help of High Resolution Transmission Electron Microscopy (HRTEM) and Energy Dispersive spectroscopy (EDS) researcher has demonstrated the presence of nanoparticles in all the potencies of the drug in centesimal scale as well as in 50 millesimal scale.

the research findings of both centesimal and 50 millesimal scale of potencies and to compare these two scales of ultra-high dilutions. Analysis using TEM and EDS has been helpful to identify the particles and their elementary composition . Therefore, it has been decided to study the sample drugs using TEM and EDS.

The presence of elements in two scales- 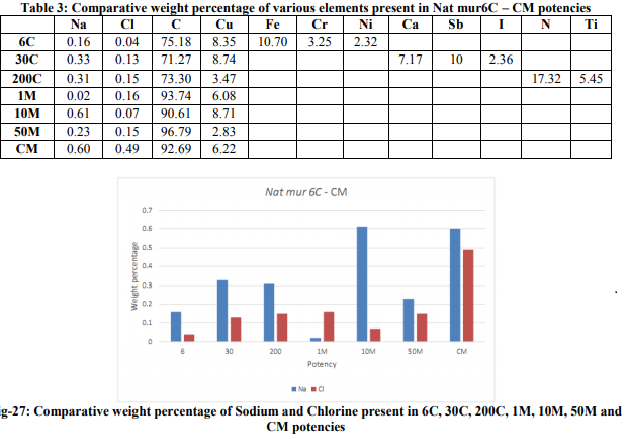 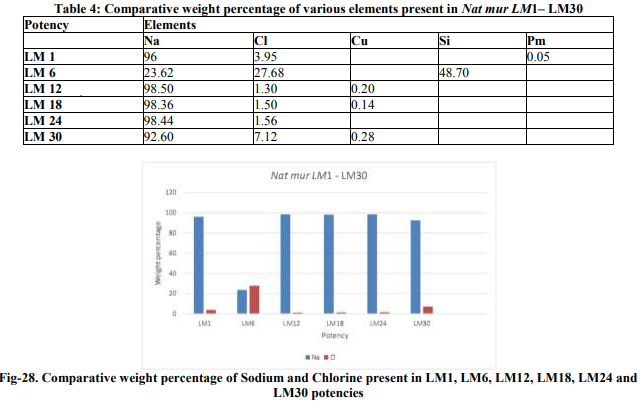 Conclusion, from the study conducted by the investigator relating to the two different scales of HDs of Nat mur, it has been observed that 50 millesimal potencies are rich with more finer and subtle nanoparticles. Abundant nanoparticles exist in higher HDs. The following observations are also made in the study that LM scale is highly rich with the presence of a number of nanoparticles & NPs in LM scale are much smaller than the NPs in centesimal scale. Na and Cl are the major elements detected in LM scale of potencies.

As LM potencies are much more “purer” (almost absence of other elements) & have much smaller NPs than centesimal, it is more bio-effective in the means of its quality and effectivity(High surface-to-volume ratio).

The benefit of presence of nanoparticles or Quantum dots rather macromolecules-

As the drugs has only molecular imprint(No mass effect) of some metals, plant or animal substance , immunosystem has no need to produce any cytotoxic T-Cells, but produce specific types of cytokines to combat the foreign imprints. As a results symptoms are arise(IR-D).

Cytokines activates macrophaging activity & T-Helper cells, which triggers B-cells & Humoral immunity. Discontinuing of the drugs, with production of humoral immunoresponse & negative feedback from cytotoxic T-cell(Non production effect) & Macrophge ( No action effect) gradually disappearing the symptoms. These symptoms are become the picture of the drug, as well as the picture of the particular module of immunoresponse.

When any microbial affect the human body-

A. NEGATIVE FEEDBACK(DOWN) REGULATION OF IMMUNORESPONSES– As the medicine introduce having only molecular imprint, T-cell produce cytokines but can not get the positive feedback signal to produce cytotoxic T-cells & initiation of Macrophaging activity. Combine effect of these three,
• Presence of similar groups of cytokines,
• Negative signal from non production of cytotoxic T-cell &
• Deactivated Macrophaging system
Produce A storong Negative feedback down regulation (control by immunoregulatory cytokines such as IL-10 & TGF-B) on present immunoresponses.

B. TRIGGERING OF HUMORAL IMMUNITY BY T-HELPER CELL– Presence of similar cytokines ,unused in cellular immunity (skipping effect) accelerate the immediate Augmentation of activation of B-CELL & PLASMA CELL to produce specific ANTIBODY(IgM) against the pathogen.

In case of Septicemia, this becomes a life saving mechanism.

The main thing is that if initiation of treatment can do earlier every cases can be arrest before the fatal Septicemia and prevent the cascade of changes that cause Multi Organ & the mortality rate will be significantly reduced . Other side, initiation of specific humoral immunity neutralized the pathogen and patient become cure.

So, whatever the viral mutation & whatever the permutation & combinations of our immunity-cascade, when there are presence of such agents having proved pictures, can easily correlate with any module of antigenic immunoresponses without bias.
Here is the schematic presentation of HOW HOMOEOPATHY MEDICINE WORK IN INFECTIOUS DISEASES-

For the asymptomatic cases & for prophylactic concern HOMOEOPATHY is too effective , as follows-

After observing of several cases of an epidemic/pandemic disease & analyzing the symptomatology, a common clinical picture emerges (say,IR-Ae). The medicine having the similar picture (say, IR-De) is become the preventive of that epidemic. This medicine is termed as Genus Epidemicus in Homoeopathy.

WHAT IS THE MECHANISM OF WORK OF GENUS EPIDEMICUS?

In human body after introduction of the medicine (having IR-De) with proper repetition & dose, T-CELLs are activated, and produce SPECIFIC CYTOKINES (which is the cause of producing IR-Ae in maximum infected patients).

But due to its controlled dose & repetition, production of it is also minimum, side by side as there is no virus present(in non infected case),no cytotoxic T-CELL are formed & recruited MACROPHAGES(by cytokines from T-CELLS) are deactivated .So the production of cytokines also balanced by Combined negative regulatory loops( Presence of unused cytokines + Non production of Cytotoxic T-cells + Deactivated Macrophaging system ). Now the balanced cytokines ,having no other work than to perform accelerate the immediate augmentation of activation of B-CELLS & PLASMA CELLS by the help of T-HELPER CELLS .The PLASMA CELLS then produce specific ANTIBODY(IgM) which protect the human body from invasion of the pathogen.

In case of asymptomatic cases, the virus is in latent phase & by the same mechanism specific ANTIBODY (IgM) develop which neutralise the pathogen.

A MORE PRECISE WAY OF PROPHYLAXIS

Initiative should be taken to prepare DILUTED SOLUTIONS of VIRUSES/BACTERIAS/OTHER MICROBIALS from biological products(of all available strains regarding countries) compounded following homeopathic procedures. The ultra diluted solution was prepared in the homeopathic dilution. As the ultradiluted solution having no pathogens in live or dead form, even no antigenic part rather having molecular imprint of the same, it is very safe for use without fear of infection.

In human body after introduction of the solution T-CELLs are activated, and produce MORE SPECIFIC CYTOKINES, but due to its molecular imprint no cytotoxic T-CELL are formed & recruited MACROPHAGES(by cytokines from T-CELLS) are deactivated .

So the production of cytokines also balanced by Combined negative regulatory loops( Presence of unused same groups of cytokines + Non production of Cytotoxic T-cells + Deactivated Macrophaging system ). Now the balanced cytokines ,having no other work than to perform accelerate the immediate augmentation of activation of B-CELLS & PLASMA CELLS by the help of T-HELPER CELLS.The PLASMA CELLS then produce specific ANTIBODY(IgM) which neutralized the pathogens. Also the production of SPECIFIC MEMORY CELLS ( by TH CELLS & ACTIVATED B-CELLS) starting the production of long term immunity by IgG ANTIBODIES.
By this procedure we can handle all groups-
firstly NON INFECTED GROUP(as a PROPHYLAXIS), ASYMPTOMATIC GROUP( curing those arrest the maximum spreading), & also in MILD TO MODERATE GROUP ( to hasten the curative process & skipping the fatal part of cytokine storm).

By this procedure we can avoids any VACCINATION TRIAL FAILURE & HAZARDS( as this form is most safe ,Stable-strain failure proof, produce short term & long term immunity).

Non communicable diseases(eg.- Heart diseases, Diabetes, Arthritis, Autoimmuno diseases,Cancers etc.)are the manifestation of some genetic module which is in build in affected human body and modified by some environmental factors.

They basically can categorised in- DEGENERATIVE, DYSFUNCTION & DEFICIENCY
Whether they are overlapped in almost all cases.

Due to some particular genetic module incorporated in ones individual human body , the some manifestation (symptoms)of it is very common to another human body responses, but some manifestations are totally different with others as , as a rule every human body has minute differentiation in its genetic arrangement,so in this sector also the genetic arrangement of that particular genetic module also differ from one to another individuals.

As the homoeopathic medicines are enlisted during its proving according the immunoresponse as a whole of the prover, the drug of choice of that particular genetic module or say the disease , is generally different in different individuals considering the similarity with IR-Ds.

The drug of choice selected on the basis of IR-Ds , actually create a same environment which mimics the offending genetic module.

The production of same group of chemical mediators(cytokines) create a negative feedback loop to offending Neuro-Endocrine-Immuno axis, which also create a negative regulation of that particular genetic module.

In short term it arrest the progression of the disease & by continuous and controlled dosing of that agent gradually produce a permanent inactivation of that particular module with obvious modification of associated triggering environmental factors.

In case of irreversible changes the further progression of disease process thus arrested and lengthening the life span ,but where the disease stage does not cross the reversibility,able to bring the total cure.

The degenerative & dysfunctions are thus controlled and cured gradually by continuous administration of the medicines. But in the Deficiencies a additional supplementation method also included to perform a complete cure.

What Next After BHMS? Higher Study Or Job Opportunities… A Brief on it