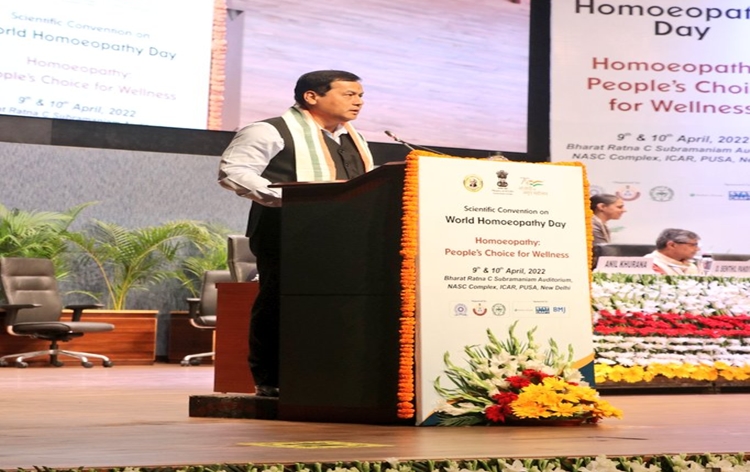 Homoeopathy Could Become The First Choice for Students Not Only Ayush, Also seeking Medical Education: Says Sarbananda Sonowal During Inauguration Of Two-day Scientific Convention on ‘Homoeopathy: People’s Choice for Wellness’

The three apex bodies under Ministry of Ayush namely, Central Council for Research in Homoeopathy, National Commission for Homoeopathy and National Institute of Homoeopathy are jointly organising this convention on the World Homoeopathy Day which is observed to commemorate the birth anniversary of the founder of Homoeopathy, Dr. Christian Fredrich Samuel Hahnemann.

Addressing the gathering, Mr Sonowal emphasized that a transformative shift is underway in education, practice and drug development sectors of AYUSH. He said that the National Commission for Indian Systems of Medicine and the National Commission for Homoeopathy which have been recently formed have aligned AYUSH education according to the new education policy and are attracting new talents to the extent that, not only AYUSH is the first choice of treatment but could also become the first choice for students seeking medical education. The Minister further said that public acceptance of Homeopathy is high and people seek treatment from the family physicians for generations.

In his address, Minister of State for AYUSH, Dr Mahendrabhai Munjpara highlighted that the Homoeopathy is very effective in treating various diseases and improves individual health by safer means at a lesser cost.

This convention is an opportunity to review the path trodden so far, achievements in the field of Homoeopathy and to formulate future strategies for development of Homoeopathy. There is an imminent need to initiate a dialogue among the major stakeholders of Homoeopathy to address much needed practice standards in clinical research informatics, data standards in clinical research, policy issues, educational standards, and instructional resources. This can be achieved by merging clinical care delivery and research as a part of a changing paradigm in global health-care delivery in the context of rapid innovations in technology. A necessity to identify and propose strategic actions towards an effective and efficient inclusion of Homoeopathy in integrative care is indispensable.

Homoeopathic researchers, scientists from interdisciplinary streams, practitioners, students, industrialists along with representatives of various homoeopathic associations participated in this convention.

Ministry of AYUSH seeks details of AYUSH drugs & results of clinical trials and research, in COVID 19 treatment- a step forward