As on August 19 , five months since Gujarat saw its first Covid-19 case, the state government has distributed Arsenicum Album-30, the homeopathic drug used as a prophylaxis to Covid-19, to 3.48 crore people, which is nearly half the population of the state. This information was part of a presentation made before the World Health Organisation (WHO) on August 20 where the state government also claimed that “99.6 per cent” of those under quarantine who were put under AYUSH prophylaxis tested negative.The presentation was shared with the media. 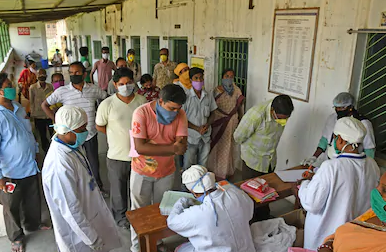 And 6.6 crore, which is equivalent to the state’s total population, have been given ‘ukala’ or kadha, the herbal potion which the government began distributing as an immunity booster, since the pandemic struck the state. The state plans to start the third round of distribution of AYUSH remedies, principal secretary, health and family welfare Jayanti Ravi told this.

The lack of scientific evidence on Arsenicum Album-30 working against Covid-19 has not deterred the Gujarat government from attributing AYUSH interventions as one of the strategies used in combating the virus.

While the four registered clinical trials pertaining to AYUSH remedies in Gujarat are yet to be completed, the state claims that 99.6 per cent of those who availed AYUSH remedies as prophylaxis during their quarantine period tested negative. 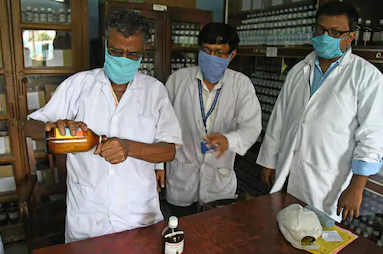 Of the total 33,264 quarantined AYUSH beneficiaries, 14,184 of these quarantined people availed homeopathic treatment. The state has gone out of its way, engaging the district legal services authorities as well, to conduct camps for distribution of herbal concoctions, Arsenicum Album-30, while also making it available in several government offices, health institutions and prisons.

Elaborating on the methodology used to distribute Arsenicum Album-30, Dr Bhavna Patel, director at the AYUSH department of Gujarat, said, “We have 268 homeopath medical officers and 568 ayurveda medical officers across the state, who liasoned with district collectors, district development officers, sarpanch, NGOs, yuva mandals and Dhanvantari raths to ensure the distribution. We also have class-I officers in each districts and similar class-I officers in 38 AYUSH hospitals, who too played a role.”

Patel said that one of the reasons for the delay in completion of the clinical trials is the difficulty “to follow-up or track the progress of the patients once they are discharged from the hospital”.

“There is only one government sponsored clinical trial, which is comparing the effects of four AYUSH remedies — Samshani Vati, Ayush-64, Arsenicum Album-30 and ukalo (herbal concoction) — where of the 50 volunteers required for the trial, 40 have participated till date,” said Patel.

“There are aspects of taking consent. There is also the aspect of private institutions who are conducting their own trials and we do not have their data,” added Patel. 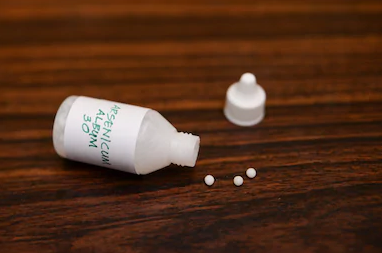 The official clinical trial registry, with respect to the government sponsored trial, however, shows Arsenicum Album-30 absent from the trial details. The trial details also specify that the randomised, parallel group interventional trial shall see a comparator agent where mildly symptomatic positive volunteers shall also be administered with azithromycin and vitamin C tablets given to the parallel group.

However, Dr Bhaskar Bhatt, an Ahmedabad-based homeopathic practitioner and past president of the Homeopathic Medical Association of India (HMAI), said, “Arsenicum Album-30 is to be used as a prophylaxis and not treatment because for the latter, a thorough assessment of the patient is required, including their family history and other aspects. Treatment cannot be a one-size fits all and instead has to be customised as per the patient’s specific requirements. One of the basic principles of treatment is also the aspect that, only after symptoms arise can they be administered homeopathic medicines.”

Since March 23, Dr Bhatt claims his clinic has distributed Arsenicum Album-30 for free to over 15,000 people in Ahmedabad. “I was approached by some organisations such as SBI, railway police, GVK Emergency services, seeking Arsenicum Album-30 in a bid to boost immunity. At the time, I had asked these organisations’ representatives to inform me if anybody tested positive for Covid-19. No one has called, so I would say it is extremely effective.”

A top health official in the state government said that the results of AYUSH remedies have been “encouraging”.

“We have some data (on the efficacy of AYUSH), although it is not very rigorous, but we have seen in pockets across the state where virulence was low (in AYUSH-administered persons) who tested positive… we have also seen among those quarantined and were administered AYUSH prophylaxis, only 0.3 per cent tested positive and 99.69 per cent others tested negative. Of course, we can’t say it conclusively as there may be various other factors (at play),” the official said.

Another Ahmedabad-based homeopath, who did not wish to be identified, admitted that data and empirical evidence remained an issue with homeopathy and “given the pandemic situation, there is a lack of documented evidence on how effective it has been”.

Explaining the preparation of Arsenicum Album-30, wherein ‘30’ the nomenclature indicates potency, the practitioner added, “The first potency will be basically one part Arsenic and 99 parts distilled water. This solution will be diluted in a similar manner for 29 more times.”

Addressing concerns on dosage, and if prolonged use can cause toxicity, Dr Bhatt said, “30 indicates potency, which is decided on the basis of susceptibility to a disease.” When enquired on how the potency level of 30 can be a uniform standard for Covid-19, for all, since prima facie studies have shown elderly and comorbid persons are more susceptible to the infection than those younger and healthier, Dr Bhatt said, “It is being given as a prophylaxis and secondly, it would be practically difficult to customise this prophylaxis per patient.”

Another practitioner added that their peers “also came across complaints of cases where the medicine was not prepared correctly or in hygienic conditions, which may have resulted in minor, temporary side-effects.”

She also adds that the state machinery is not only using it as a prophylaxis but also as treatment.

Homoeopathy Could Become The First Choice for Students Not Only Ayush Also seeking Medical Education: Says Sarbananda Sonowal During Inauguration Of Two-day Scientific Convention on ‘Homoeopathy: People’s Choice for Wellness’